Shedding Tears with a Patient

Shedding Tears with a Patient

A frail woman, head tilted back on the white pillow,
surrounded by the cold, sterile walls of the hospital room.
COPD, stable, breathing noisily.
No visitors in sight, except the chaplain and me.
She wakes up.
Her story similarly bleak.
We listen.
Heart full of good intentions,
she moved across the country to help
her brother and sister-in-law cope with the loss of their son.
She remembers her nephew; 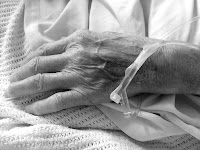 so young, such a pity, found dead under a bridge.
She too felt deep loss with her own son's death
five years ago; yet, feels like yesterday.
She wonders if she fully processed losing her son.
But she isn't allowed to grieve for him:
their pain is greater, more recent, more important.
She doesn’t matter.
She asks, "God why did you bring me here?"
She left behind her adult daughter to move west;
now she wants to go back home.
No money.
They make her give her social security checks to them.
Bills to pay, they say. Food to buy.
They let her stay at their house.
They think that's enough.
"I just want to die," she whispers.
We sit with her.
Silence echoing.
Shedding tears.
Email ThisBlogThis!Share to TwitterShare to FacebookShare to Pinterest
Newer Post Older Post Home

For Prospective Patients, please schedule a free 15-minute Meet & Greet appointment (click here) to learn how Essential Direct Primary Care works and whether this innovative healthcare model will be a good fit for you.

We are committed to your privacy. Do not include confidential or private information regarding your health in the Contact Us form below. This form is for general questions or messages.